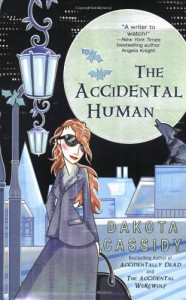 Wanda has been diagnosed with ovarian cancer and has been given six months to live.  Unlike her supernatural friends Marty and Nina, Wanda has not had the luck of meeting a supernatural lover and so decides that it's time to get her affairs in order, so as not to burden her friends and family when she is gone.  Enter the very human Heath Jefferson.  Heath is down on his luck and very much in need of a job and so decides to answer Wanda's ad for a make up sales person.  First, Heath must convince Wanda that even though he is a man, he can sell makeup to women and then when he discovers his attraction to her, Heath has to find a way to make Wanda admit her attraction to him as well.  The clock is ticking though, and with only a few months left to live, Wanda has to consider whether its fair to lead Heath on, though he just might be the love of her life.

The Accidental Human is a bit of a relief after reading Accidentally Dead, which had Nina as the protagonist.  Wanda is thoughtful, conservative, and an obsessive list maker.  Learning of her impending death causes Wanda to step outside of her comfort zone.  Unfortunately, Wanda is another gently used protagonist, so part of her dealing with her impending death, is to attempt to have a friends with benefits relationship with Heath.  Wanda also begins to swear freely for the first time and even calls her childhood bully to tell him off.  For the most part, Wanda is enjoyable.

I still found myself cringing with every scene Nina appeared in.  Nina continues to be hostile and angry for the sake of giving the appearance of toughness and ends up being a distraction each time she appears. I like that Wanda is the glue which holds the friendship between her, Marty and Nina together.  At the end of the day, despite their differences, these women really care about each other and make their relationship a priority despite the hectic nature of their lives.  I really like that Nina encourages Wendy to have sex and take of her "womanly needs", without any kind of shame.

The love interest in The Accidental Human is Heath, a former vampire. Heath wakes up one day to find that he is human after two hundred years and all of his earthly possessions have disappeared because they were all the result of magic.  With his manservant at his side, Heath is determined to embrace his sudden humanity, though it means sleeping in a homeless shelter while searching for a way for a job.  Having been turned down from various fast food placed and Walmart, the prospects look grim.  If this is Cassidy's version of attempting to introduce class into the Accidentals series, it fails miserably.  Heath mentions that it is difficult to stay clean and yet, beyond this statement of fact, he is always impeccably groomed. Because of his sudden poverty, Heath is forced to eat things like Ramen Noodles and Spam, yet is overjoyed by this diet because he finally has the opportunity to eat food after two hundred years.  He only vaguely mentions gaining weight because of his diet and never discusses how a diet lacking in things like fiber, fruit and vegetable and high in sugar and starch, can leave one unhealthy and without energy.

When Heath calls about a job selling Bobbie-Sue  makeup products, and Wanda expresses doubt about his ability to sell, he invokes gender discrimination.  This is meant to be used for a laugh because it perplexes Wanda because she cannot understand why a man would want to step outside of society's rigid gender roles and sell makeup, despite the fact that Heath goes to great lengths to make it clear that he needs a job.  This bit of role reversal with Wanda being Heath's boss and Heath invoking gender discrimination for laughs really didn't work for me at all.


In terms of inclusion, it really The Accidental Human is a hot mess.  There is tons of speculation regarding Heath's sexual orientation by Wanda and her friends.  This is followed by constant assurance that not only is Heath heterosexual, he is so uber confident in his masculinity because he can sell makeup at a Trans America pageant and doesn't get upset when the contestants come on to him.  Really?  No, really?  Naturally, Heath breaks a Bobbi-Sue record selling to the contestants and all this because he is supposedly so progressive when it comes to gender.