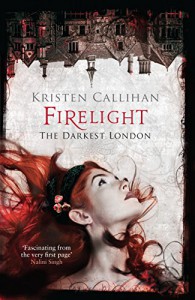 Miranda Ellis has the ability to start a fire out of anything that will burn.  It's a gift that allows her to navigate the dark alleys of London without concern and at the same time it's also the curse which destroyed her family's wealth.  Miranda is forced to steal to put food on the table.  Her life changes forever with a chance meeting with Lord Benjamin Archer. Years later, when Miranda is informed that her father has arranged her marriage to the mysterious masked man, Miranda is indignant but with no other options, Miranda is forced down the aisle.  She didn't expect to come to love Archer in spite of his secrets.  It  this love which inspires Miranda to fight with all she has to save Archer's soul.

Firelight is a historical romance with elements of the fantastic thrown in. In The beginning of the novel, Callihan's work is so purple that it would make Barney weep.  Not to worry, she quickly moves beyond this as she finds her voice; however, that voice is just as irritating.  We are treated to a long scene in which Archer watches Miranda eat.  Why?  Miranda's father already made it clear that they were living on deprivations and so having her wonder at the food didn't exactly establish anything.  The only thing it made me wonder is what the hell the servants are going to get?  Then there's the trip to the museum, and Miranda's shopping trip with her sisters.  These incidents added absolutely nothing to the plot.

Archer quickly falls in love (read: lust) with Miranda.  He does the whole, I'm bad but I have to have you routine.  On her part, Miranda takes a little bit of time for the same declaration.  The two characters do actually get to know each other a little.  From the beginning we get to hear all about how Miranda gives Archer wood and makes him feel like a man.  I quickly got tired of erection descriptions.  There is a massive build up to their first kiss but before that we get treated to a scene where they touch tongues and of course breathlessness, sighs and heaving bosoms ensue.  Who exactly lies in bed with their lover not kissing but touching tongues and moaning? Am I really supposed to find this hot?


So, Archer has some big secret for which he wears a mask to cover the left side of his face.  After much hinting about the fact that he could be disfigured, it turns out that Archer actually is a half light demon and has been trying to look for a cure.  Okay, kudos to Miranda for not running away from the man she loves but taking his marble demon penis inside her?  Really?  I just wanted to scream, lady, there are limits.  I do however have a question, if Archer's penis is like marble wouldn't that mean he is always erect, thereby making the scenes in which we are given descriptions of how Miranda gives him an erection redundant?

Okay, what's Miranda's deal? Well as I mentioned earlier, Miranda can create fire.  The problem?  We don't know why because it's never explained. Somehow she learns to control her power and we never learn how.  Miranda can also provide heat to cold people, something she learns on the fly but yeah, no idea why.  If you're going to give a character a super power, it's important to give the reader some kind of explanation, particularly when it's going to be used for the dramatic conclusion.