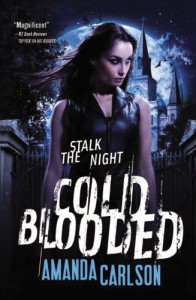 Jessica arrives back in town after rescuing her mate Rourke only to discover that her best friend Marcy has been kidnapped.  Marcy's powerful witch aunt Tally wants answers.  It's not long before they are all attacked by sorcerers and are forced to flee.  After Jessica learns of a vision from a seer that she must head to New Orleans to save her father and find Marcy, she on the road again.  It's not long before Jessica finds herself fighting against the forces of the underworld and trying to strike a bargain with the wily vampire queen.

This is book three in the Jessica McClain series and we still have yet to have any meaning plot or character development.  Cold Blooded shifted back and forth between battle scenes and Jessica and Rourke either having sex, or angsting about their desire to have sex.  If you are into action scenes, this might be your thing but at this point in a series, I expect to know more about the characters involved.

We are told that Marcy is her best friend ad nausem but because Marcy had been kidnapped we don't really get to see her interact with Jessica very much.  The rest of the people Jessica is close to she spends issuing orders throughout the novel.  Despite being a newborn Lycan, she never doubts herself, no matter the situation and you guessed it - everything always works out in her favor.  I suppose it has to because it's the chosen one but it makes the book read as though Jessica is just working through a series of tasks.

This series is predicated on Jessica being the only female werewolf and therefore is either feared, desired or hated.  These motivations most of her interactions.  Unfortunately, Jessica continues to deal with this by developing some new Lycan ability on cue.  She is literally the chosen one and these meme is simply played out in this genre.  I have yet to see Jessica use reason in any confrontation that she is in; however, she is more than willing to suddenly decide to challenge a demon lord.  I suppose that was meant to come off has daring but it read as stupidity to me.


Jessica's insta-love with Rourke has been established be virtue of woo woo.  It feels like a cheap short cut.  These two don't really have to bother to get to know each other or develop any kind of friendship.  Rourke and Jessica simply need to have sex and it's I love you forever.  Carlson also dips into the paranormal romance shtick when she has Rouke and Jessica fighting for their lives and yet setting off pheromones everywhere and feeling a desire for each other.   Who becomes horny when they are fighting for their lives? This just pulled me out of the story and irritated me.