The Pining of Kevin Harding by Devon McCormack 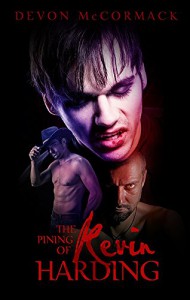 Kevin doesn’t want to be a vampire. He doesn’t want to kill people to live and so far he has resisted – but his master is getting impatient and his power and control is impossible to resist

Do vampire hunters offer another risk – or a final opportunity to escape?

This one didn’t work for me – for several reasons, but largely down to the whole thing feeling rushed and slap dash.

We have a world with vampires – vampires that are masters and create hives of drones that are compelled to be loyal through various supernatural beings – but we never really go into that, into what it means to be a vampire, into their society (which they clearly have), their physiology or much of anything else. There are vampires, some are masters. That’s it

The world building feels like it wasn’t so much built as bits were thrown in when it was narratively convenient without any attempt to make any foundation or extrapolate on these elements that were created, leaving gaping holes, lots of fuzzy areas and leaving me somewhat bored and disinterested.

Which applies to the characters as well. Morgan is a one-note damaged hot guy with a tragic backstory who will be cured with the magical sexing. Dax is the rather simple buff hot guy who… know I can’t even expand on that. That’s all he is. Kevin is a somewhat blah character from a somewhat blah background who is… somewhat blah. I can’t really point to one memorable thing about him. He apparently always wanted to be an actor, but is painfully shy and introverted. He’s pretty childish which only manages to pass because Morgan is so much more EPICLY childish (complete with massively whiny tantrums) that Kevin’s own immaturity is masked. That’s kind of all I know about Kevin – he’s a vampire, he doesn’t want to be, he’s whiny, he’s shy and introverted and he falls in love waaaay too fast.

Ironically, the bad guys – Kevin’s master, Kevin’s master’s enemy and   are more developed. But only because the master’s enemy had to engage in a massive convoluted info-dump to try and justify his utterly bizarre actions.  Not that they are developed particularly – for all of his massive info-dumped past (whyyyyy?), Kevin’s master is just old, powerful and bizarrely infatuated with Kevin after facebook stalking him. And? She’s just evil. Sadistic and monstrous without even the slightest shred of human development – and since she’s the only real female character in this book that is doubly shady. I also don’t remember a single POC in the book – the only diver element was the men being gay.