Six Moon Summer (Seasons of the Moon #1) by SM Reine 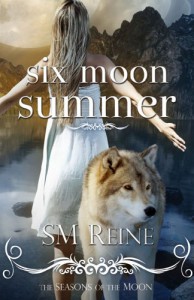 Rylie didn’t want to go to camp. She’s a city lover at heart and she doesn’t want anything to do with her and the great outdoors. Especially not when her parents are just getting rid of her so they can arrange their divorce

But even she didn’t imagine of the threats of nature would be being bitten by a werewolf.

Now she is slowly transforming, her appetites, her anger – and that’s without the moon rising. She has 3 months to find a way to stop it, or she’ll be a monster for life.

I am torn. On the one hand I have to applaud how very human Rylie is – and not just Rylie, everyone. She’s a teenaged girl going through some terrible times with her family and has been dumped in summer camp, basically to get rid of her while her parents try to sort through their lives. In addition to resenting being kicked off to the middle of nowhere, Rylie is an urbanite. She doesn’t like the countryside, not even a little.

Rylie is not a happy young woman.  On top of that she’s also turning into a werewolf which comes with its own set of complications and problems

And it shows – she’s a surly teenager who is kind of surly. This generally leaves me jumping between two stances: irritated with Rylie because she’s not perfect, she’s angry and she doesn’t always act perfectly because of it. Or angry with the people around Rylie for the somtimes unfair way they treat her, because they’re also not perfect and they’re generally trying (especially the camp counsellor).

I have to say that neither stances nor the story makes me especially particularly like her but that’s not a criticism on the character. She is a very real character, a very human character and, like many people who are going through a difficult time, she’s not especially likeable. And that’s fine – she’s is a very good character with interesting points and character growth. And it’s her very normal humanity that makes her slow transition into becoming a werewolf and all that means all the more powerful and meaningful.