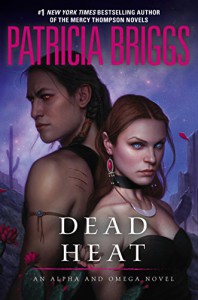 Anna and Charles are travelling again – but this time for a nice simple holiday to see an old friend of Charles’s before he dies. It’s a painful reunion and a harsh reminder of the cost of the werewolves’ immense longevity

It’s also a chance to buy Anna a horse from his friend’s excellent ranch. But soon after arriving the quickly find something far more dangerous going on. The fae are finished playing nice with humanity and to push negotiations in their favour they’ve released some of the darkest monsters among them

One of which preys on children and his hunting in the area – including his friend’s family. While neutral in the conflict brewing between the fae and humanity, the werewolves won’t tolerate children being targeted, especially not children connected to the pack.

I think this book was an excellent follow on and contrast to Fair Game. There our sympathies are very much with the fae – it is the fae who are being attacked, cruelly abused and not supported or helped by the human government which leads to the major event in the world setting of the Fae withdrawing to their compounds. We open with this tense moment and both the werewolves and the humans bracing for the possibility of a human vs fae war or, at very least, some very tense relations.

This book shows the other side – that the fae are not nice and are rarely the victims. After most of both this series and the Mercy Thompson series in which the fae tried to play the PR game with humanity and had it fail so dramatically in Fair Game we now see the fae basically letting their monsters loose. They tried to play nice. They tried to keep their greatest monsters hidden and constrained but if humans aren’t going to work with that then it’s time to let loose the kelpies and the child snatchers.

I love this change of direction because it adds so many shades to the whole conflict. The way the fae were treated was unacceptable, but sending out monsters that target children? Equally awful – this puts both the reader and, similarly, the werewolves in the position of team nobody. Or, rather, the position of defending whoever is being unjustly abused regardless of which “side” they’re on. It promises for a lot of interesting plot lines in the future and also adds to the greater meta-feel of Alpha & Omega compared to the much more personally focused Mercy Thompson series.

So we’ve got a nifty little murder mystery with lots of horror and surreal elements from the fae all with a backdrop of big political happening which I really like.

One potential issue I can see is this book has a lot of horse talk in it. One of the hooks to get Charles and Anna on sight is that Charles is getting Anna a horse. I have a feeling the author loves horses and is very involved and knowledgeable about them. Personally I am pretty indifferent to horses and know next to nothing about them and I didn’t find the horse talk engaging – but nor did I find it particularly dull or book breaking. Since I’m not a horsey person and it didn’t bother me I can’t see it being too much of a barrier, but your mileage may vary.

In previous books set in this world we had commented that, while there were Native American characters, very little of their culture or history went into the actual books. There was a lot of using Native American heritage for woo-woo justification but no actual development of that. Then there was the great swallowing-of-wikipedia which led to massive info-dumps that were painful to read. This book has pulled back from that. Many of the characters in this book are Navajo and their culture is frequently referred to and a very real and major part of many of their characterisations. There’s also a much bigger sense of research rather than info-dumps and regurgitations – it’s a massive step up. If I have one criticism it’s that, at times, it feels rammed into conversation in a manner that is almost comical. I sometimes feel these characters couldn’t sit down and discuss a football game without referencing some aspect of Navajo beliefs or customs.

The world building itself was pretty involved in other aspects as well – the fae and their powers particularly got a nicely sinister analysis.

I also appreciate that this book didn’t particularly have a big Anna-needs-rescuing moment which is something that has bothered me a few times in this book. We did have one relatively minor moment which was pretty good at showing the power of PTSD and how Anna is still very much recovering. This was an ongoing point throughout the book that I appreciated – Anna’s traumatic past hasn’t been solved by the love of a good man, she isn’t magically cured, she still has triggers, fear and other symptoms of PTSD that she has to manage. However, because there was this ongoing presentation throwing in an extra Anna being rescued scene felt unnecessary.

Other than that, I liked Anna as a character and she continues to grow in her Omega-ness. Calm, controlled, sensible, capable and repeatedly making it clear to all the posturing wolves around her that she really isn’t impressed by their macho commands. She’s a wonderful challenge to the problems this series has had with dominant alpha males. We also have a new female werewolf, C Chelsea who is strong, determined and defiant and wonderfully heroic in the opening of the story. An interesting minor character of note is an older woman, completely unashamedly sexual and, I think, potentially immense fun. The only negative I have on the depiction of women front is the jealousy from Maggie to Anna, but Anna responded with nice maturity and it’s another interesting comment on being unaging and what that can mean.

I also really liked Charles’s examination of his gift-giving habits, realising that his love of giving Anna expensive jewellery is less what she wants and more his way of claiming her (her wearing them in public is a form of his public declaration of ownership) and adjusts his plans to get her something more meaningful to her.

We have the return of Leslie, capable, no-nonsense, an expert and widely respected in her field and definitely leading the charge of the investigation from the human side. I think this character has immense potential and in the last book I said I wanted to see a spin off series. I say the same in this book – I like her, but I want a whole lot more of her.