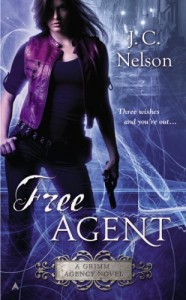 Marissa works for Grimm who runs the Agency. He’s a fairy and he grants wishes – your happily ever after can be yours!

For a price – a price paid in hard earned Glitter, the essence of magic. It’s the high cost of glitter and the desperate need for a wish that led Marissa’s parents to sell her to Grimm in the first place. Now she works saving kids from wolves, ensuring princesses and princes fall in love (dumping the princes and letting the princess pick up the pieces is surprisingly effective) and generally counting the glitter until she earns her freedom.

But her latest routine job, matchmaking a prince and princess, goes terribly wrong – and it just escalates from there. A prince has gone missing, the fae are set to invade the Kingdom and Marissa has caught the attention of a fae queen and the big bad from every fairy tale ever. And there’s a new fairy godmother in town, maliciously granting Marissa’s heart’s desire and Grimm doesn’t appreciate people muscling in on his turf.

It worked because it didn’t try to push an idea of the silly, lightness that fairy tale depictions often try for. This may be silly at times, but it’s not light and it keeps the grim going. This has a woman running off with Glass Slippers that try to possess her. This is a world where Red Riding Hood is so named because she dipped her cloak in the blood of the wolves she slaughtered. This is a world where mirror-living fairy godparents are vastly powerful beings that hand out magical wishes at exorbitant fees (paid for in the ever precious “Glitter”) and that includes parents selling children into indentured servitude to pay for desperate wishes.

This is a world where the high magic and wonder of fairy tales is included but without any jarring elements. The Disney is pushed back, the contrasts used for jarring contrast and amusement more than jolly little giggles. The whole theme and tone works, it really works with none of the ill-fitting elements I’m used to. When there’s comic relief it’s more because of things added like the Gnomish postal service hating Marissa because she ran one of them over. It doesn’t rely on fairy tales made dark to make us laugh. It has fairy tales and it has humour but it isn’t FLUFFY

The world always keeps that magical fairy tale touch and the re-imagining really works; we have royal houses with Princes and Princesses with all the fairy tale elements in the Kingdom – which is a wonderful mash up of castles, swords and sorcery and skyscrapers and CEOs. It has some delightful moments like a princess converting a hellhound (because princesses and animals!) and some deep edgy moments like the origin of witches.

Which brings us to our protagonist, Marissa – and excellent mix of hope, cynicism, youth, experience, confidence and doubt. She’s the indentured servant to Grimm, a fairy (and therefore ultimate power) because her parents sold her. She has a lot of desperate hope for the future and because of that she isn’t really living her life – but nor does she have any solid plans for her future either beyond some nebulous hope. She matures a lot over the process of the book, realising she’s not as good as she thinks she is in some cases while also discovering new confidence in other. She also takes direction in her life – as an indentured servant, an effective slave, she’s had very little in the way of choice about which way her life goes or what she does and she finds her agency, her choices and her power over the course of this book. And all of that while being the mundane person in a sea of people with woo-woo.