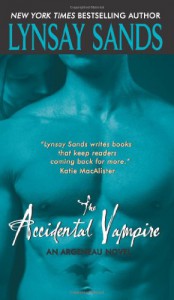 After being turned into a vampire on a trip to Mexico, Elvi Stone returned to her home in small town Ontario.  The residents, feeling guilty for encouraging Elvi to go on the trip, after the loss of her daughter and husband, decide to protect Elvi because she is one of their own.  Not having met her sire, Elvi has no real understanding of what it is to be an immortal and is forced to turn to movies, books, and folklore, to muddle through.  With her friends entering the senior stages of their life and the realization that when they do finally die, Elvi well be alone, they decide to hunt down a boyfriend for Elvi by visiting clubs in Toronto, looking for a vampire boyfriend and when that finally fails, placing an advertisement in the singles pages of all things.  What they don't realise is that vampires are supposed to keep their existence secret from mortals and through their attempts to find Evli a love match, they have brought her to the attention of the council and the powerful Argeneau family.  When Victor arrives, ready to deal with what he believes to be a rogue vampire, what he does not expect is to find that he cannot read Elvi's mind, or control her in anyway.

The Accidental Vampire is a typical paranormal romance - boy meets girl, they fall in love, a misunderstanding occurs, they work through it and declare undying love for each other.  It's formulaic at best and filled with essentialist gender stereotyping.  That being said, it's what I have come to expect from Lynsay Sands, after reading seven of her books. I know going in not to expect a literary masterpiece and settle in for light fluff and the occasional laugh.  Sands has a talent for infusing her romance stories with a touch of humor, which doesn't always make me laugh but at least puts a smile on my face.

Believing all of the vampire lore to be true, Elvi has not touched a drop of food in five years.  When suddenly, Elvi learns that she can eat, it becomes a cheesecake emergency, leading her to rush to the local A&P for the essentials of cheesecake and chocolate.  I must admit that not being able to eat for five years, I would have considered it an emergency myself and chocolate would be high on my list. Essentialist or not, chocolate and women go together.

As a protagonist , Elvi is a touch naive.  Some of it I am sure is from the fact that she is from a small town; however, a woman of her advanced age (read: 62), really should be more aware than she is.  I do however like the fact that she refuses to be controlled and is always ready to stand toe to toe with Victor.  However, when pushed, Elvi does not fear to use Victor as a threat, when she promises to have Victor retrieve a young man, if he refuses to step forward on his own.

Don't make me send Victor over there," she threatened. That had the effect she'd hoped and after a brief hesitation, the boy slunk out from behind the principal and started reluctantly forward, weaving through the crowd toward the booth. "Gee, thanks. Make me the heavy," Victor said by her ear, his hands settling heavily on her shoulder. "I'm sorry," Elvi murmured. "But you're scarier than I am." "And I always will be," Victor agreed. "Besides, there's no need to apologize. This is all very informative. It tells me that 'Wait 'til your father gets home' will be something our children hear a lot of." Elvi glanced at him with a start. "Children? Is that your idea of a proposal?" Rather than answer, Victor gestured in front of her. "Owen has arrived. (pg 231)

Elvi couldn't possibly be scary on her own, though she is stronger than the humans around her and is more than capable of hurting them or killing them, as Elvi proved in her attack on Mable, when Elvi was first turned.  Nope, Elvi is only scary when she cries, causing discomfort in the men around her, who then have no idea of how to deal with a distraught woman.  Elvi is going to do the correct feminine thing in the future and threaten people with Victor, who being manly and super tough, will handle the situation for her.

Her best friend Mabel actually seems quite a bit more together.  Mable while supportive of Elvi, is very suspicious of the men who have answered her ad and Mable makes it clear from the very beginning that she is going to watch them like a hawk.  Mable has always had to be strong but this characterisation was destroyed by the fact that Mable was strong because her husband was not a take control type of man (read alpha male).  All Mable really wanted was to find herself an alpha male so that he could lead and she fit into a more feminine role.