Dying by the Hour (Jesse Sullivan #2) by Kory M Shrum 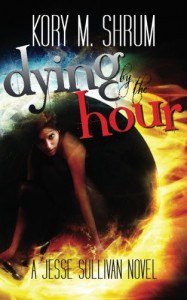 Jesse is now very high profile as a Necronite and Death Replacement Agent – which means she’s also a target for a lot of hatred, especially from the United Church.

But more dangerous than the constant hatred attacks she faces is the dark conspiracy that comes from her own long hidden father that shadows the church’s actions. That conspiracy is still active – people are disappearing, probably dying and Jesse and Alice have to find them… though what they will do and what they will risk to do it may be far too great.

This book continues several of the elements I loved about the first book – the world setting is excellent, the whole concept of Necronites is one I want to really delve into. The whole idea of “death replacement” as a profession is original and something I love to see – I would actually like to see a lot more of it.

The ongoing conflict with the church is also a nice angle – with a combination of grand conspiracy theories from shadowy leaders as well as on the ground prejudice from fanatical members, both willing to pursue their own hatreds and follow orders. I like the extra conflict that comes from what Death Replacement agents can actually do – the choice between hatred and life is very clear. I also think the growing conspiracy and shadowy motive behind the church helps put things like the unification in a more understandable light since there is clearly something guiding their hand behind the scenes. The depiction of prejudice is good and we’re getting some history into the previous military detention and experiment on necronites (which, in turn, provides more motivation for other dubious characters in the book) – but there is some definite appropriation of LGBT issues and comparisons being made which is all the more shady as the Necronites gain new abilities.

Our protagonist is Jesse who is rather flailing in all of this – but in a somewhat good way. In some ways she seems to be trying to pursue a somewhat ordinary life – as much as possible. A lot of that isn’t willing because people are keeping her in the dark (including Brinkley and Alice). I like Jesse, she has a snarky viewpoint, is very over her depth and definitely afraid of what’s happening around her even as she becomes inured about the constant hatred and prejudice she faces. It’s also great to see a bisexual protagonist. She and Alice have an interesting relationship, full of conflict and distance because of Jesse being with Lane and each side trying to protect the other which comes with a lot of work and worry and secrets. I find it interesting in how that in turn relates to Alice’s relationship with Nikki and Jesse with Lane – they’re both with “love interests” who are more casual, who they have less invested in, who isn’t so high stress. I think that could do to be developed more since it is a valid concern and something that would make an important point on their relationships - that for all Alice and Jesse are passionate about each other, they have no fun and it’s all torn with guilt and responsibility and duty. It needed developing.

As it is that leaves Alice being an extremely competent, skilled, intelligent character – and a Lesbian as well – who is excellent to follow; but she also feels a little creepily obsessed with Jesse to a rather unhealthy degree – and Nikki is orbiting Alice on the sidelines in a kind of unhealthy “one day you’ll love me!” kind of way. I do like that it’s clear Nikki knows Alice’s feelings and she isn’t being exploited, but I’m waiting for everything to messily come apart.