Burn for Me (Hidden Legacy #1) by Ilona Andrews 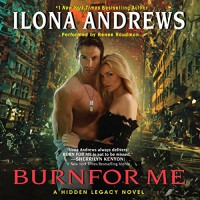 When Nevada Baylor’s family were forced to mortgage the family detective business to the powerful mage family House Montgomery, they knew there was a risk (getting involved with the powerful Primes is always a risk). But they didn’t expect to be given a suicide mission.

Nevada has to find Adam Pierce, anarchist son of a powerful House, and bring him home. Before the police find him or kill him – because Adam is an immensely powerful Prime Pyrokinetic wanted for burning people to death. And he’s not likely to come quietly.

“Mad” Rogan also has his own reasons for hunting down Adam – which leaves Nevada with not just one immensely powerful Prime to work around – but two.

Yes, the names Nevada and Mad Rogan are ridiculous but ignore them because genre.

The first thing which strikes me about this book is the world setting. Of course, I had pretty high expectations having read the Kate Daniels series and I’m thrilled to say they were met.

The way magic is blended into the society is really nicely done and balanced well between giving us far too much information (this being a new book) and giving us enough information for us to follow what is happening and have lots of hints of future things to develop. We can see magical rituals and artifacts, we can see a lot of the different magical abilities, the power levels and how that works (in broad terms) and we have a lot of meat to chew on and a whole lot of hints for more to come

But more than that is the way that the world has been changed by magic – again, artfully hinted at. With magic becoming the ultimate source of wealth and power a magical aristocracy has developed, ruled by Primes (the most powerful magic users) and controlling corporations, a lot of wealth and a lot of government – in fact, to some degrees the magic Houses seem to be more important than nations (though, even then, with a whole new power resource in magic the political map has also changed, with Native American nations and Mexico both arising as major powers). In turn, since magic is the main and most important resource, then magical power – through selective breeding and magical skill both obsess the House’s; it’s an interesting adjustment when power is an inherent part of the family’s own bodies not just the resources and money the House commands.

I like that there is this depth – because you can’t change our world with such a dramatic addition of powerful magic and expect it to still look a lot like ours.

This also works for a whole lot of class features – as these hyper-able, super-powered and immensely wealthy Primes and Magical Houses have an immense sense of entitlement, can often act with little oversight and even have a (slightly condescending but also honest) sense of noblesse oblige which is another interesting class angle. They exploit, use and dispose of people they consider beneath them, but still have an obligation to the city as its rulers – but that obligation is as much a self-serving interest in the system as it is any sense of honour or compassion. It’s another interesting knot to the world.

Even more than the world setting, I really like the characters – especially Nevada. She isn’t a major power, her woo-woo is useful but not all powerful and certainly nothing compared to the Primes around her. For me she hits that perfect balance between standing up for herself in the face of the Primes trying to control her and being recklessly provocative, though I would understand if there were people who thought she went too far to the latter. She draws lines around her life, she’s sharply clear that there are ways she shouldn’t be treated and, even if they have power to treat her that way anyway, she makes it clear that she isn’t just accepting that treatment. And if that means hanging up on a Prime or telling him he’s a terrible person then so be it. Yes it’s risky but it’s never defiance for the sake of defiance – it isn’t Keille independence where the “strong female character” acts out with rage for no reason – in every instance she is provoked intolerably and responds as much as she is able within the constraints of the power divide.

I also like how she works – she is that most clichéd of urban fantasy professions, a Private Investigator. And she’s good at it – she doesn’t just use woo-woo nor does she just hang around and wait for the bad guy to conveniently decide she needs to die and therefore walk into a trap. She investigates, she researches, she has her whole family team do leg work, she looks at financial records, she examines her subject’s personality and judges her actions based on it. She actually works and has skills.

She is also an amazing character and a very feminist one, she makes a wonderful point about her independence, having her own business and controlling her own destiny and how that means so much more to her than the advantages that so many of the wealthy have around her. She doesn’t have their luxury but she has freedom and agency. She recognises this not just in herself and the caged lives the wealthy live - but also in the golden chains Rogan uses to win the loyalty of his employees - rescuing them at their most vulnerable to bind them to him.

And back to that family – she has one. Yes, her father is dead (having both parents alive in an Urban Fantasy is against every rule and you will be kidnapped by the Urban Fantasy Mafia for perpetuating it), but that adds to elements of the story and the family’s current predicament beyond angst (of which there is very little). It doesn’t feel like he’s dead because dead parent = requirement. And she has a loving and supportive mother who doesn’t always agree with Nevada but is there to back her up – and has her own lethal talents. She also has siblings and cousins who have an excellent family relationship – and she as a grandmother who is a magical mechanic and also pure awesome. Families are so rare in Urban Fantasy that it’s a joy to see an extended, loving family.

Now to the romance which, I have to say, my notes are a complete confused mess over. Firstly, I have lots of notes complaining about how every guy is super-duper-unbelievably hot and needs to be described as such which gets tiresome – but then I have praise (and laughter) about the rich magical users in society using illusion to make themselves look perfect and some pretty awesome snark about the amount of illusion some of them have plastered on. Of course, that same level of over-the-top-he’s-so-hot-I-can’t-breathe continues when describing both Adam and Rogan.