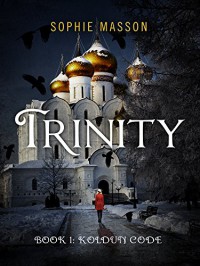 But Alexey has more on his mind than romance – his father and father’s 2 business partners have all been murdered within a short space of time. People are whispering about a curse – and not only is the murderer still uncaught, but other forces have their eyes on his father’s business, looking to wrest it from his inexperienced and idealistic hands.

The first thing that struck me about this book was the amount of research that has gone into it. From my unfamiliar eye, this author seems to have made the effort to ensure the Russia of the book wasn’t just a Russia of bad stereotypes and alien culture – there has been some work into making this real and authentic. I can’t say how good a job has been achieved since I am neither Russian nor especially experience in all things Russian, but I can feel the effort behind it.

I just feel it’s a shame that so little has been done with it.

I don’t understand why Helen is the protagonist. In fact, take a step back, I don’t understand why Helen is in the book at all. All the action, all the story twists, all the mystery and the investigation and everything else? It doesn’t involve her. It cannot involve her. It’s all completely beyond her experience, affecting people she’s only just met and investigating/resolving it requires knowledge she doesn’t have, skills she doesn’t have and working with/speaking to a lot of people she’s only just met, most of which she doesn’t even share a common language with.

Rather reasonably, because of that, she doesn’t actually do anything. And it is reasonable – even her few interjections about whether Alexey can trust someone or not (for example) come across as ridiculous because she is so outside of her experiences, her skills or her specialities that her intervening would be ludicrous. She doesn’t. She can’t. She spends the vast majority of this book just following Alexey around and occasionally taking little breaks to work on the romance (I’d say “develop” the romance but that would be a stunningly generous description of what happened). Honestly, she could be entirely removed from the book and very little of real value would change.

So let’s get to that romance – firstly, it also adds very little to the plot. It’s an odd tool used to pull Helen (and, therefore, the protagonist) into the story as audience without having to come up with an actual reason for her to be there. Helen and Alexey meet (he nearly runs her over), they arrange a second meeting. Boom. LOVE FOREVER, Alexey (a man receiving death threats) is now happy to have Helen follow him around everywhere, be party to all of his company’s secrets and generally be with him every second of the day when business doesn’t drag him away (and she is free to roam around his work place/home as you would any near stranger). The romance is tooth-achingly saccharine and quite dated - Helen actually uses the words “Oh, Alexey”. She says this more than once; I started picturing everyone in black and white after that. It’s also comically speeded up with Helen happily considering moving to Russia and spending the rest of her life there after… a week? Less?