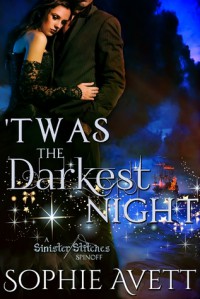 Elsa is a witch and not a happy one. Primary among the things making her unhappy is trying to keep the charm shop she inherited from her father running – a seemingly impossible task. Socialising is something she’s largely written off, preferring cake.

But Marshall, her vampire tenant, may actually have the key to solving her money troubles – but it means going away with him to secure an important contract for his firm. Of course, alone together on a romantic Christmas scrooge (and them both dedicated scrooges), other priorities arise.

This book begins in a very intriguing fashion. We’re presented in a full world with a vast amount of supernatural creatures, a city that is ruled and dominated by the supernatural, lots of monsters and magic and even a focus on some creatures we very rarely see in the genre – Trolls and Huldra. The world is described in a very intriguing fashion. My hopes were raised, this world really interested me and I wanted to see more.

Elsa herself had a somewhat mundane but neat little task – she has inherited her father’s shop and wants to make it a success; there’s also a very artfully suggested underlying issue she also has to deal with but is more teased than revealed as we burrow into the plot. I also really love Elsa the Troll and her little problem with greed.

I even like how Marshall offers to help – recognising her independence he offers a trade of services: her magical help in exchange for his advertising expertise. He offers a service that will help her shop rather than playing the White Knight and simply buying off her creditors. I was intrigued – this was looking good.

The problem is that this very promising setting is used to be a background for sex. Lots and lots and lots of kinky sex. Sex and S&M scenes consume most of the book and there are major problems with this.

By far far FAR  and away the most severe of them is the problem of consent. The sexual relationship between Elsa and Marshall begins with rape. There’s no ambiguity about this (the book has a “dubcon” and “forced seduction” written in the front – this isn’t dubious – it’s rape. Elsa is restrained, helpless, does not consent and is raped. There is no question of that. The rape is certainly not treated as rape, Elsa does not regard him as a rapist and there is generally a denial of the whole rape element here. If anything, she is annoyed that he has seized control and she is determined to enforce her own authority over the relationship she is now determined to continue and even pursue. She pursues a relationship with her rapist, the rape seems only to annoy her because of the power dynamics of the relationship rather than the actual violation itself.

From there we just have lots of really broken consent – basically she then decides her appropriate action will be to use magic and woo-woo to control and sexually assault (and, again, rape) him. This back and forth rape seems to be the establishment of their relationship and the assumption that everything from then on is actually consensual. To which I just repeatedly gaped at the book and occasionally just chanted “no no no no no” over and over again.

Once we have that problem it seems pretty ridiculous to complain about anything else because, really, rape renders everything else somewhat moot. But I did find there was a problem with how the sex consumed the story and the world building, even if there wasn’t any rape. Sex and sexual tension seems to take the place of expositioning this world, of the whole mission they’ve set out to do – even the conflict between Marshall and his ex feels undeveloped and tacked on so we can have some more angst from Elsa and an evil Ex trope. There’s so much focus on the sex that nothing else really thrives

It’s not that nothing else exists but sex – no we have Elsa‘s body image issues which are huge and linked very much to who and what she is and we have Marshall and his tragic childhood. Both of which I’d be more interested in if it didn’t feel like more pulling from the main plot.