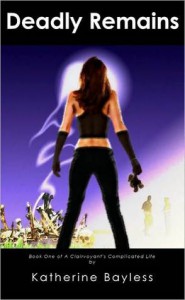 Lire works for the police pro-bono – and as the most powerful touch-psychic in the area, she’s definitely a major asset. Unfortunately, prejudice and superstition make it hard to convince others to accept that, especially Detective Vince Vanelli. She has enough problems navigating in a world where touch is a constant peril, without having to babysit the chip on his shoulder

There’s a serial killer on the loose and she’s determined to help catch him especially when one of the victims hits so close to home. She pushes far further than is wise – both taxing her powers and rising the ire of an secret organisation that has a lot of power to make life difficult; but can Lire really risk the killer killing again?

And there were a lot of concepts I’ve seen before – but this goes to show that a concept doesn’t have to be completely new to be awesome. Because while I’ve seen them before, I don’t think I’d seen them as well done as I have here. The information that Lire gets from touching things is really well done – as is the peril of her touching things without realising. The way she can get overwhelmed is really well done – as well as the worry over the subject matter – how can you go around touching things involved in a murder without seeing and experiencing truly horrendously traumatic images and events? Or, what if you touch someone who themselves is a terrible person and you absorb their entire experience and mind set? It’s really well written to really bring home the power of these visions and how they can affect the psychic’s mental health.

On top of that, the world building has been developed beyond these concepts – so we have a psychic who gets impressions from touching things? We often see that, are giving a dash of tragedy and move on but this book takes it to the next level. What does that mean? How does this psychic eat? How do they drink? How do they wash their clothes or buy furniture or sleep in a hotel? Since animals also leave impressions, can they even eat meat? This is where this book excels – it takes the basic concepts but develops it and makes it real with the detail and all the little elements that we generally don’t think about but have to be considered.

I also love how it’s developed into an actual marketable skill – authenticating antiques or providing information for historians is an excellent twist I’ve never come across before.

I’ve rambled on about this world building of the psychics for a while and it probably gives a terrible impression that there are lots of infodumps in this book – but there isn’t. It actually flows wonderfully with all these elements of the world naturally incorporated into Lire’s experience.

Also she has an undead necromantic possessed teddy bear which manages neither to be twee nor ridiculous. How can this not be a good thing?

What did, I think, drag the book down a little wasn’t the world building or the writing both of which were excellently integrated, but the plot. I loved the plot – I loved all of the plots. I just don’t think we needed plots, plural, in the first book of a series. We had the serial killer plot that was a good story, it was an exciting plot, it had lots of information to chew on, was an excellent way to get to know the world, establish the characters and the way magic works and give us lots of exciting action and baffling mystery as well. This story was excellent, well written and good fun.